This Time is Different: The Death of Valuation

The intellectual calamity of “Big Data”

A recent article from Bloomberg counted a leading quant from one of the world’s largest asset managers as a believer that there is “no way to tell if betting on ostensibly cheap companies will work again.”  Noting that Tesla’s valuation, at 10,392x trailing earnings, 33x book value, and 11x sales made no sense on those metrics, the article suggests the secret to pricing Tesla, ostensibly, lies in using big data to tap into “…social media to gauge employee sentiment…”[1]  Kailash would like to note the following: if the price paid relative to cash flows is no longer the primary bridge to valuation, capitalism has changed.  If markets will now allocate capital based on novel new metrics then corporations have a disincentive to seek profitability.

Unfortunately, Kailash believes the idea that things are different this time to be a very old and very flawed story big-data or no.  For investors betting with managers purporting to glean market-beating information from big-data, we encourage you to read the brilliantly written “Everybody Lies”[2] by Harvard trained and former Google data scientist Seth Stephens-Davidowitz.  Familiarizing yourself with the curse of dimensionality might be important for you and your portfolio.  To summarize the book’s finding regarding stocks, Big Data cannot predict which way stocks are headed.

Figure 1 below shows that growth’s lead over value has exploded since we first published the chart in Growth vs. Value: A Predisposition towards the Importance of Price has been Painful. Despite this, Kailash will not abandon a previous approach whose logic we understand (although we find it difficult to apply) even though it may mean foregoing large, and apparently easy, profits to embrace an approach which we don’t fully understand, have not practiced successfully and which, possibly, could lead to substantial permanent loss of capital.   As any student of the markets will instantly see – the bolded statement is plagiarism.  Those words were written by Warren Buffett in 1967[3] in response to pressure to pursue the “nifty fifty” whose exorbitant valuations were rationalized using a slew of new valuation methods. 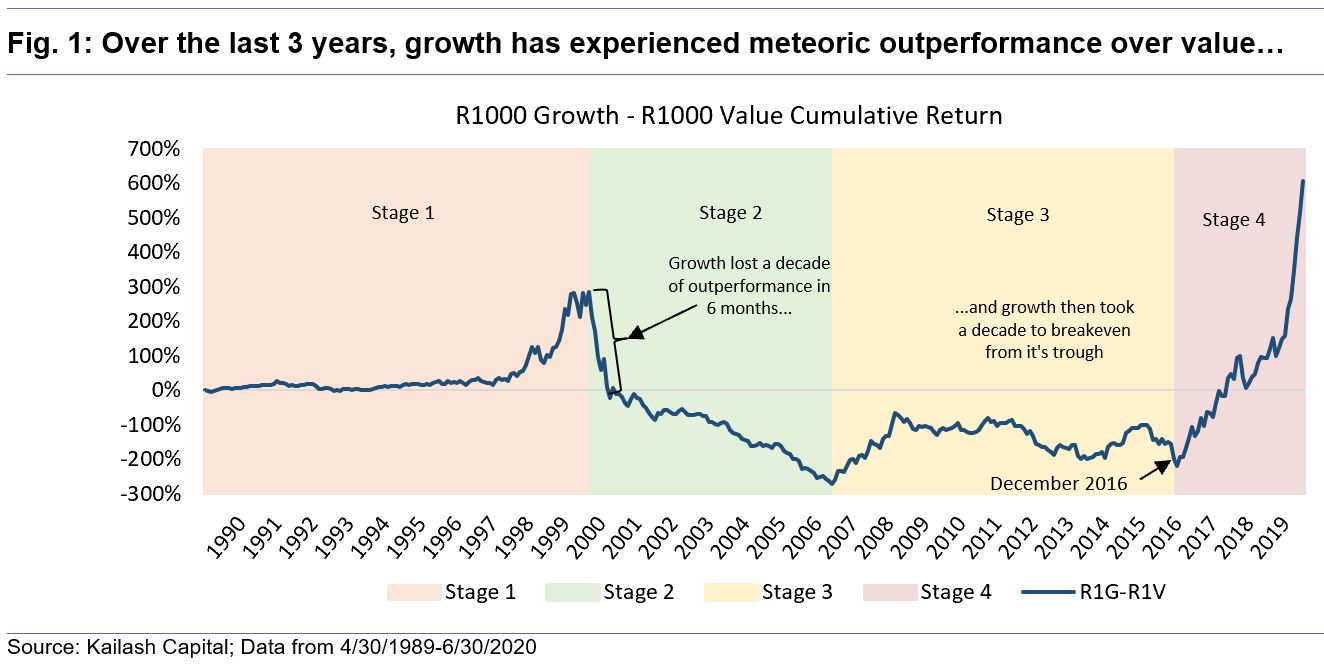 Figure 2 below shows the already dramatic performance discrepancy between growth and value is dwarfed by the return spread between the Nasdaq and the Russell 1000 Value.  Causality is difficult to establish, but Kailash believes much of Nasdaq’s manic run is simply a wall of money chasing what was already racing higher.  For context, in mid-September of 2008, with the market already down 24%, the Fed began to intervene.  Through the trough in March of 2009, the Fed’s balance sheet grew just over $1 trillion or $7.7bn per day.  In contrast, the Fed began the largest expansion of its balance sheet at this market’s peak in mid-February.  From Feb 17th  through June 1st, the Fed added $3 trillion or a staggering $39bn a day, swelling the balance sheet to about $7 trillion as of the end of June.

In our June publication, Value Investing & Manias, Kailash gave readers market-beating advice.  First, we explained that the immense outperformance of growth stocks over value stocks placed performance spreads and market concentration in the 99th percentile of history.  But then one of our conclusions was that investors, convinced “this time was different” (not a conclusion Kailash is comfortable with), should “…buy the ~25% of firms with the highest price to sales ratios that have driven growth’s performance to valuations last seen at the peak of the internet bubble.”  In so doing, we encouraged people who thought value was “dead” to chase growth stocks that must contend with simple math, as explained in a terrific article written by Fortune’s Shawn Tully.[1]  In the few weeks since growth has risen at a 37% annualized rate while value has declined at a 37% annualized rate.[2] 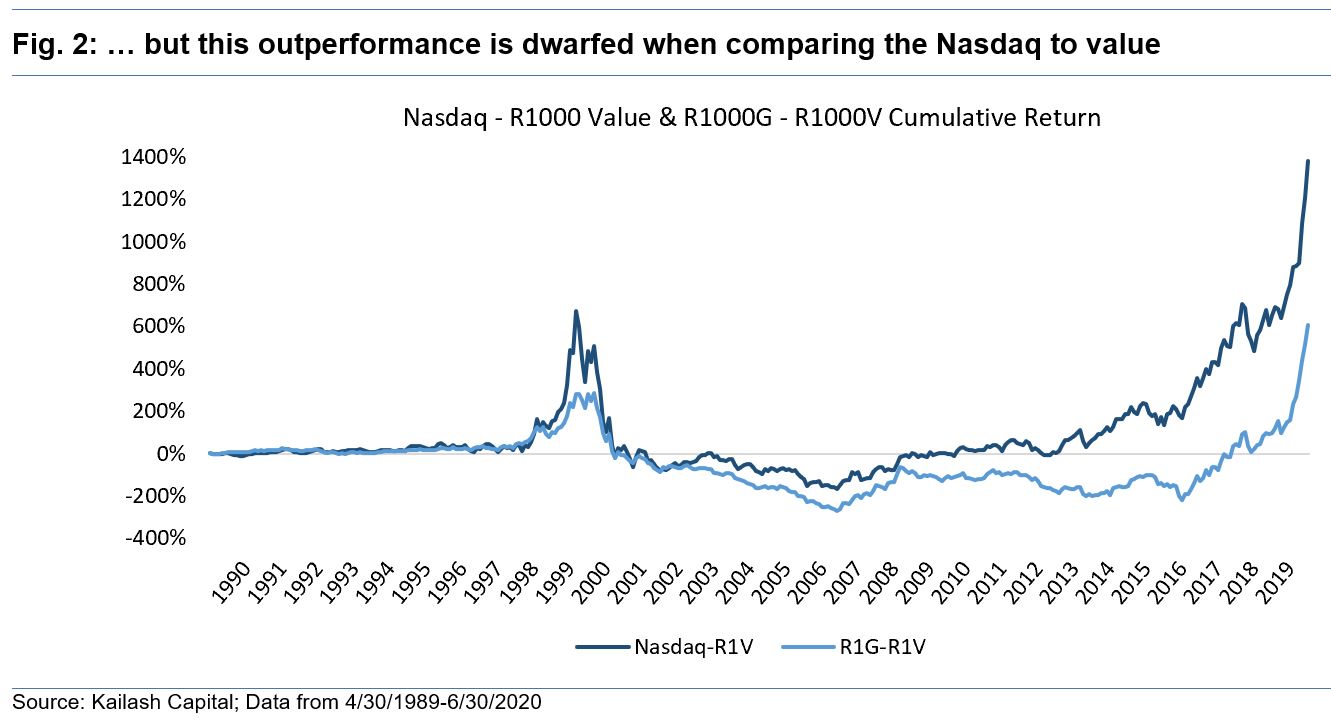 Kailash wanted to see if our contention that the market’s most richly valued stocks are growing richer was, in fact, correct.  In our 2012 publication The Siren Song of Growth, Kailash documented that the world of growth investing was prone to more diffuse outcomes with the percent of names that were the biggest winners and losers dominating the group at the expense of firms with more prosaic outcomes.

The horizontal axis in Fig. 3 is broken up into the deciles of 12-month relative returns ranked from worst to best.  The navy-blue bars show the distribution of the highest growth[1] firms’ performance from worst (decile 1) to best (decile 10) between 1989 and today.  You can see that over the long-haul, the high growth cohort has fat tails with 14% ending up in the worst decile and 14% in the highest decile.   This is similar to our 2012 finding in Mid Cap Growth.  When you buy into the most richly priced firms, you are more likely to win big or lose big.

The light-blue bars show the distribution of high growth firms in the 2017-2020 period.  The change is startling. In the last 3.5 years, buying the highest growth firms has been an extraordinarily successful tactic.  Just shy of 25% of the most expensive firms have been in the best decile of returns (decile 10) while only 6% have landed in the worst returns.  Investors that believe this time is different are betting that highly unusual payoffs like this are the “new normal” and therefore, likely to persist.

[1] BlackRock Quant Sees Stock Valuation a Mystery Not Worth Solving

[2] Everybody Lies, Big Data, New Data, and What the Internet Can Tell Us About Who We Really Are, -Seth Stephems-Davidowitz

[6] High growth is defined as the top decile of price to sales, a method we used in Growth vs. Value to avoid the academically inclined and needlessly complex (in our view) price to book ratio