The Collision of Arithmetic & Over-Optimism

This paper seeks to discredit the “quality & growth at any price” thesis underpinning many of the market’s leading growth firms.  Kailash intends to review and provide evidence of the following:

Jeremy Siegel published an article in 1998 stating that the “Nifty Fifty” were “properly valued at the peak” as the stocks performed nearly as well as the S&P500 over the ensuing 25 years.  The paper described the Nifty Fifty as “high market capitalization stocks…” that traded at “…50, 80 or even 100 times earnings” representing “the world’s preeminent growth companies.”

This definition is important.  Acknowledging there never was an official “Nifty Fifty,”[4] Siegel used a list of names published by Morgan Guaranty Trust.  As Siegel stated of the 50 stocks he analyzed: “the 25 stocks with the highest P/E ratios yielded half the subsequent return as the 25 stocks with the lowest P/E ratios.”  As evidenced here, the fact that valuation created a 2:1 return advantage within a group of 50 richly valued stocks is, in our view, the most valuable component of his paper.  Accordingly, Kailash uses the 25 most expensive stocks within the 50 largest firms in this paper to verify the magnitude of the pricing error driving markets today.

Figure 1 below shows that the market cap of the Largest 25 Growth firms have never in history been as highly valued relative to GDP as they are today. 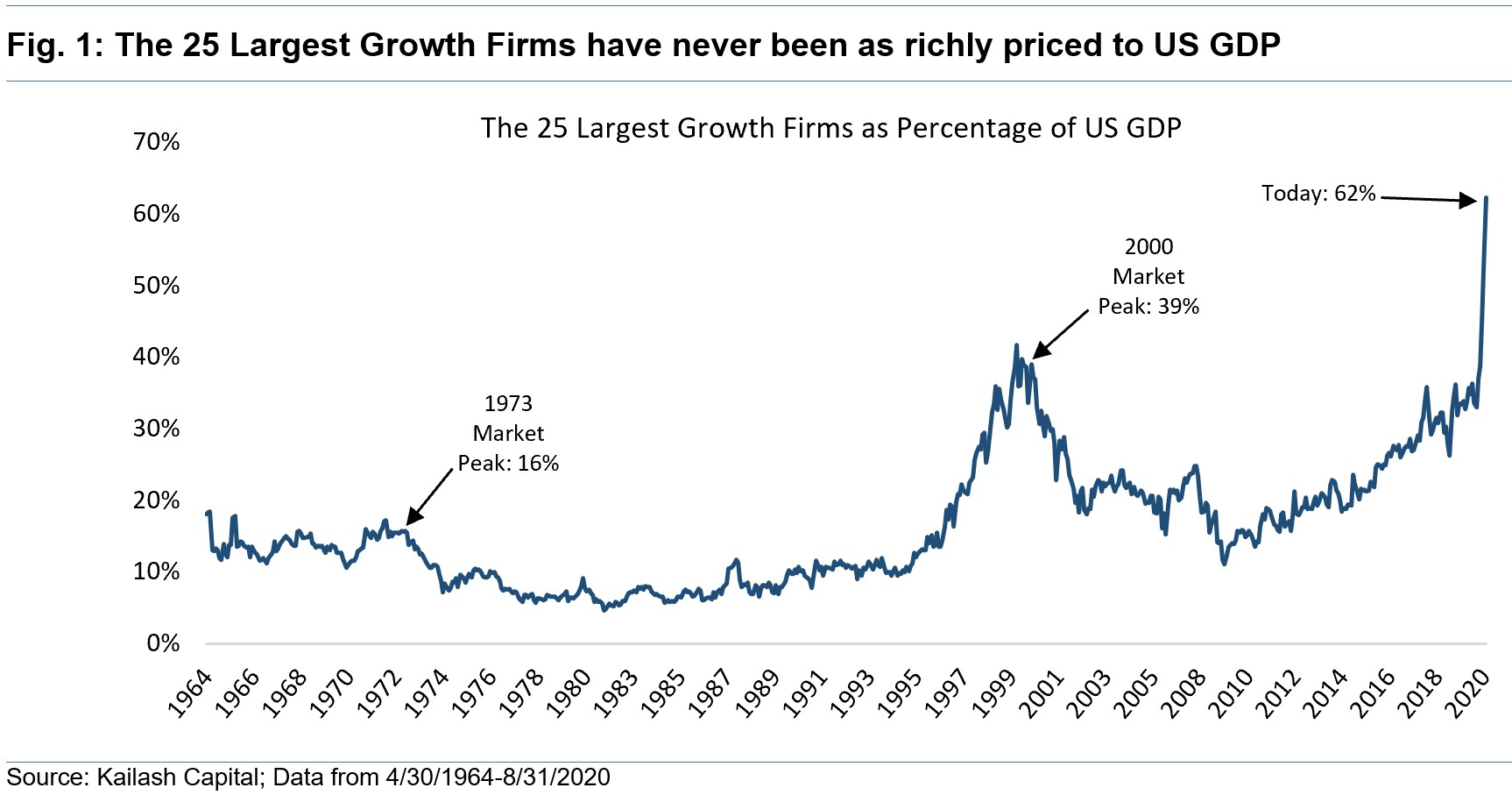 Kailash has repeatedly used Warren Buffet’s Market Cap to GDP metric to express our rising concern with aggregate market valuations in pieces like This Time is Different as well as Growth vs. Value Part I and Part II.  The Fed is suddenly the biggest asset manager in the world with BlackRock[5] in second place.  This leaves us wondering if oceans of funds invested in a fundamentally agnostic manner have abetted the surge in the 25 Largest Growth firms.

Kailash’s concern is based on very simple arithmetic.  Figure 2 shows that if the 25 Largest Growth stocks generated a compound annual return of 10% over the next decade, their valuation would rise from $12 trillion today to $31 trillion by 2030 (first two rows).  If the US economy grew at a compound rate of 3% annually over the same period, GDP would be $26 trillion by 2030.

The math here is blindingly obvious.  Buying the 25 most expensive firms within the 50 largest market cap firms today is an arithmetically reckless bet.  Already more expensive relative to US GDP than any time in history, if these firms generate 10% annual returns while the US grows well above any forecasted rate, they will be larger than the US economy in very short order.

The concerns raised by Forbes’ Jesse Colombo about the potential for disaster to strike a richly valued market are as valid today as when he penned Disaster[6] in September of 2018.  This is a piece well worth reading (link below) considering the challenging arithmetic facing the Largest 25 Growth firms above.  At current valuations, Kailash believes that none of these risks need to manifest themselves to facilitate negative outcomes for investors in the 25 Largest Growth firms.

Subscribe to our Premium Plan below to receive the full pdf.

[1] Howard Marks, speaking to the CFA Society, India, https://www.youtube.com/watch?v=LtogMv–d4g [for those who have not seen it, this is a must watch, CLASSIC Howard Marks brilliance!]

[5] The Stock Market is Currently Facing the Iceberg Illusion