“The results indicate that earnings performance attributable to the accrual component of earnings exhibits lower persistence than earnings performance attributable to the cash flow component of earnings.  The results also indicate that stock prices act as if investors “fixate” on earnings, failing to distinguish fully between the different properties of the accrual and cash flow components of earnings.  Consequently, firms with relatively high (low) levels of accruals experience negative (positive) future abnormal stock returns that are concentrated around future earnings announcements.” – Richard G. Sloan, “Do Stock Prices Fully Reflect Information in Accruals and Cash Flows about Future Earnings?”, The Accounting Review 1996

We do not know if Richard Sloan fully appreciated the academic and environmental consequences these three sentences would have in the years following their publication.  Untold acres of forest have been felled as accomplished academics worked furiously to create an endless array of papers wrestling with the power and problems of the “accruals anomaly.”  Sloan demonstrated that between 1962 and 1992 an investor purchasing the decile of firms with the lowest accruals and shorting an equal dollar amount of the firms with the highest accruals would have experienced hedged returns over 10% per year with only 2 losing years.  In a market many academics believed to be “efficient,” the idea that a single factor could create a nearly perfectly hedged return stream was heresy.

For those unfamiliar with Sloan’s work, he defined “accruals” as follows:

Sloan used operating income after depreciation as his measure of “earnings” which required the deduction of taxes payable to true up the accruals figure. Ultimately, the formula above allows you to decompose a firm’s earnings into cash and non-cash components.   To put it crudely, the concept was utterly intuitive—firms whose earnings were the result of non-cash accounting items were more likely to see reversals in reported profitability while those with fewer accruals (and higher cash earnings) were less likely to have profit declines in the future.  The problem for some academics was that this information was readily available and in theory should have been understood by the market.  Working with other noted academics, Sloan would later write that examining analysts’ and auditors’ work indicated that they both failed to appreciate the implications of accruals in their actual forecasts[1].

Looking at some of the more recent literature, a reader will find talented authors working with determination to show that the accruals effect was merely a necessary premium for taking unusually high bankruptcy risk or was largely a function of improper risk analysis or even that it is merely capturing value spreads.  Look a little bit more and you will find phenomenally accomplished authors rebutting virtually every one of these contentions.  Kailash’s house view is that the accruals anomaly is very real, and this opinion is partially informed by the peripheral evidence that some of the most successful stories in the active management industry over the last decade appear to have been at least partially, if not largely, founded on the concept.

More recently however, the accruals issue has received newfound scrutiny because the effect appears to have faded in the post 2001 period: 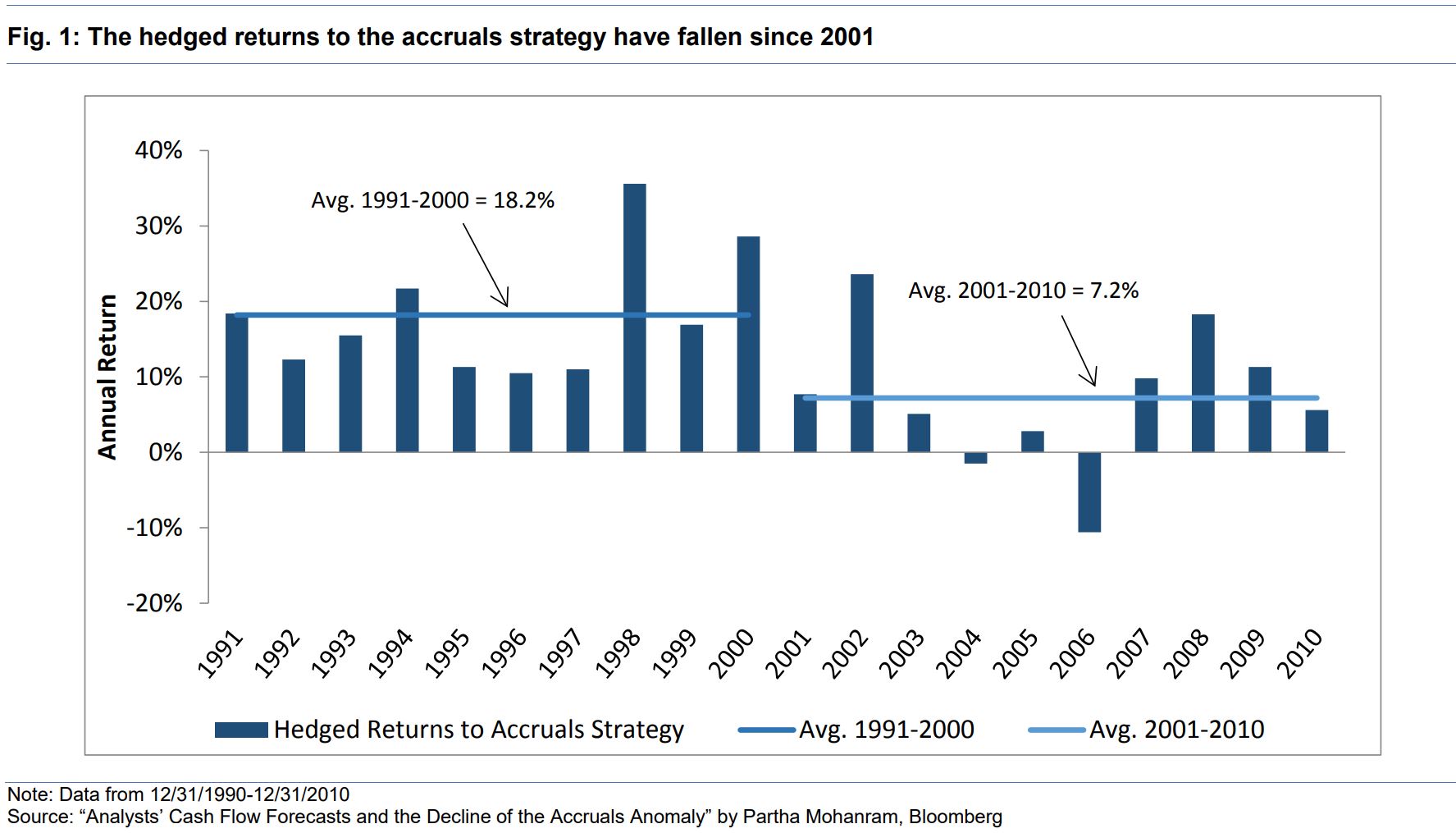 Like the accruals anomaly itself, the apparent weakening of the effect has drawn significant attention.  Some academics have been able to point to the use of cash flow estimates by the analyst community as the culprit while others have argued that the proliferation of large hedge funds helmed by academics has put tremendous arbitrage pressure on the accruals signal.[2],[3]  Another interesting paper made a compelling case that the arrival of Sarbanes-Oxley and FAS 146 made the discretionary component of accruals both more difficult to use and less interesting to managements.[4]  The fundamental practitioner among us looks at the post 2001 period and thinks some of the strategy’s leaner years (2004-2006) were conspicuously coincidental with the emergence of our finance-led bubble and an unusual shift to lower quality firms.  With that said, all opinions are rendered moot in our minds as it seems plenty powerful that a univariate signal (even at its weakened level) could still put up hedged returns that dwarfed the index’s returns with a fraction of the volatility. 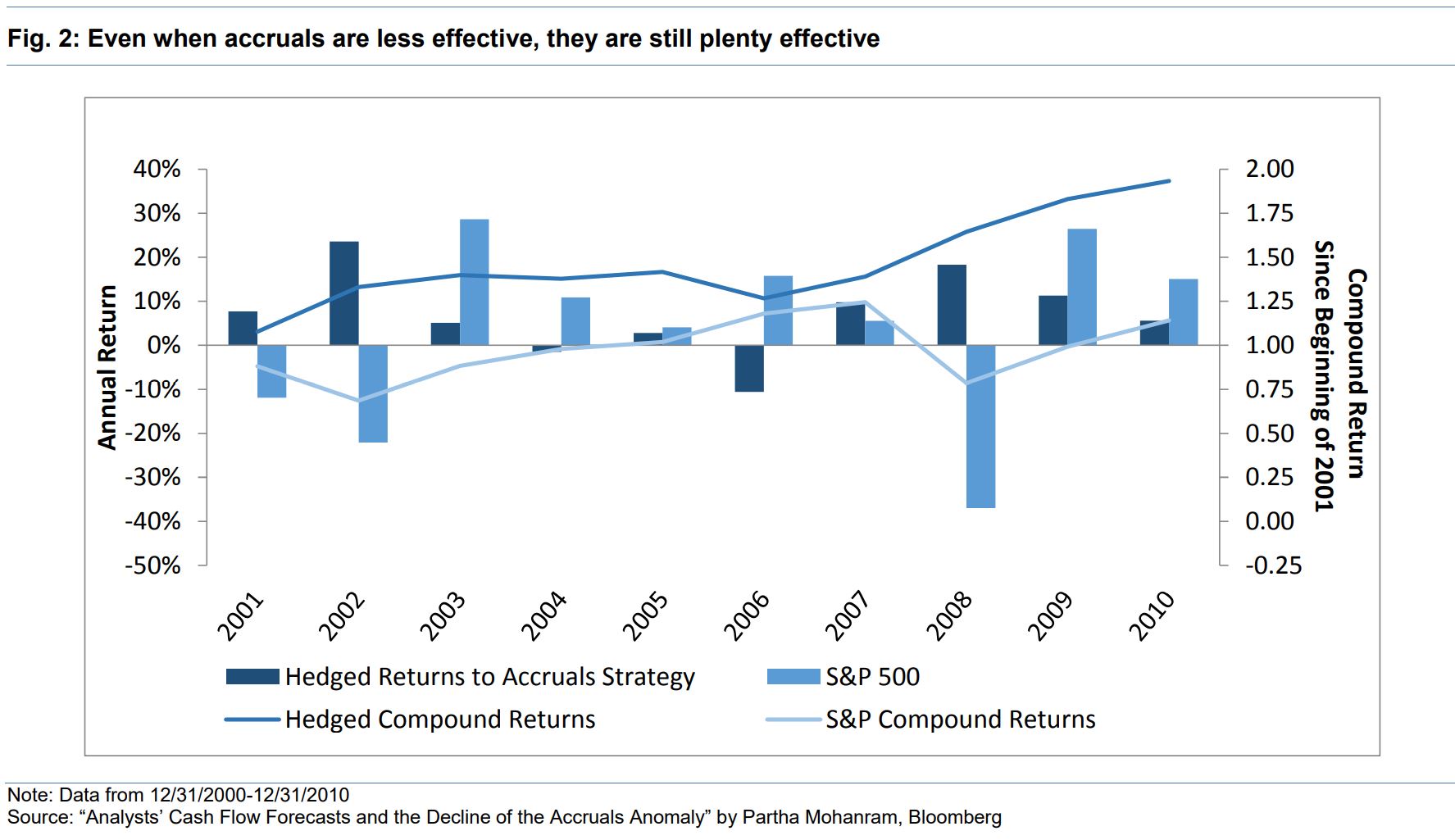 [1] Do Analysts and Auditors Use Information in Accruals?”, Bradshaw, Richardson, Sloan 2001.